Will robots take our children’s jobs?

Will robots take our children’s jobs?

Like a lot of children, my sons, Toby, seven, and Anton, four, are obsessed with robots. In the children’s books they devour at bedtime, happy, helpful robots pop up more often than even dragons or dinosaurs. The other day I asked Toby why children like robots so much.

“Because they work for you,” he said.

What I didn’t have the heart to tell him is, someday he might work for them – or, I fear, might not work at all, because of them.

It’s not just Elon Musk, Bill Gates and Stephen Hawking who are freaking out about the rise of invincible machines. Yes, robots have the potential to outsmart us and destroy the human race. But first, artificial intelligence (AI) could make countless professions obsolete by the time my sons reach their twenties.

You do not exactly need to be Marty McFly to see the obvious threats to our children’s future careers.

Say you dream of sending your daughter off to Yale School of Medicine to become a radiologist. And why not? Radiologists in New York typically earn about $470,000 (£348,000), according to Salary.com.

But that job is suddenly looking iffy as AI gets better at reading scans. A startup called Arterys, to cite just one example, already has a programmeme that can perform an MRI analysis of blood flow through a heart in just 15 seconds, compared with the 45 minutes required by humans.

Maybe she wants to be a surgeon, but that job may not be safe either. Robots already assist surgeons in removing damaged organs and cancerous tissue, according to Scientific American. Last year, a prototype robotic surgeon called Star (Smart Tissue Autonomous Robot) outperformed human surgeons in a test in which both had to repair the severed intestine of a live pig. 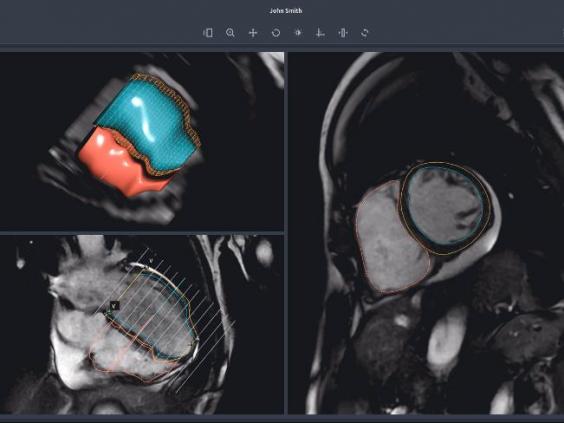 A programme built by Arterys can perform an MRI in just 15 seconds, compared to 45 seconds by a human (Arterys)

So perhaps your daughter detours to law school to become a rainmaking corporate lawyer. Skies are cloudy in that profession, too. Any legal job that involves lots of mundane document review (and that’s a lot of what lawyers do) is vulnerable.

Software programmemes are already being used by companies including JPMorgan Chase and Co to scan legal papers and predict what documents are relevant, saving lots of billable hours. Kira Systems, for example, has reportedly cut the time that some lawyers need to review contracts by 20 to 60 per cent.

As a matter of professional survival, I would like to assure my children that journalism is immune, but that is clearly a delusion. The Associated Press already has used a software programmeme from a company called Automated Insights to churn out passable copy covering Wall Street earnings and some college sports, and last year awarded the bots the minor league baseball beat.

What about other glamour jobs, like airline pilot? Well, last spring, a robotic co-pilot developed by the Defence Advanced Research Projects Agency, known as Darpa, flew and landed a simulated 737. I hardly count that as surprising, given that pilots of commercial Boeing 777s, according to one 2015 survey, only spend seven minutes during an average flight actually flying the thing. As we move into the era of driverless cars, can pilotless planes be far behind?

Then there is Wall Street, where robots are already doing their best to shove Gordon Gekko out of his corner office. Big banks are using software programmes that can suggest bets, construct hedges and act as robo-economists, using natural language processing to parse central-bank commentary to predict monetary policy, according to Bloomberg. BlackRock, the biggest fund company in the world, made waves earlier this year when it announced it was replacing some highly paid human stock pickers with computer algorithms.

So am I paranoid? Or not paranoid enough? A much-quoted 2013 study by the University of Oxford Department of Engineering Science – surely the most sober of institutions – estimated that 47 per cent of current jobs, including insurance underwriter, sports referee and loan officer, are at risk of falling victim to automation, perhaps within a decade or two.

Just this week, the McKinsey Global Institute released a report that found that a third of American workers may have to switch jobs in the next dozen or so years because of AI. 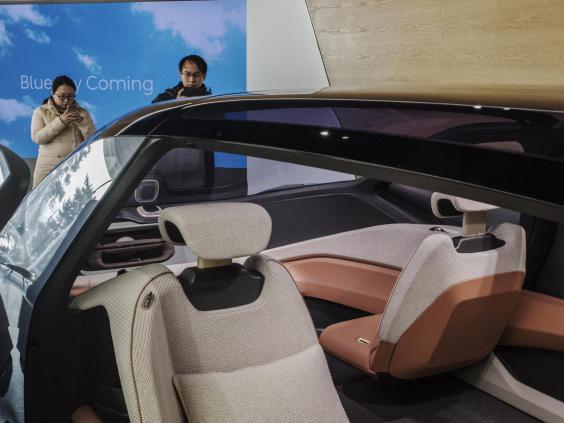 I know I am not the only parent wondering if I can robot-proof my children’s careers. I figured I would start by asking my own what they want to do when they grow up.

Toby, a people pleaser and born entertainer, is obsessed with cars and movies. He told me he wanted to be either an Uber driver or an actor. (He is too young to understand that those jobs are usually one and the same).

As for Uber drivers, it is no secret that they are headed to that great parking garage in the sky; the company recently announced plans to buy 24,000 Volvo sport utility vehicles to roll out as a driverless fleet between 2019 and 2021.

And actors? It may seem unthinkable that some future computer-generated thespian could achieve the nuance of expression and emotional depth of, say, Dwayne Johnson. But Hollywood is already Silicon Valley South. Consider how filmmakers used computer graphics to reanimate Carrie Fisher’s Princess Leia and Peter Cushing’s Grand Moff Tarkin as they appeared in the 1970s (never mind that Cushing died in 1994) for Rogue One: A Star Wars Story.

My younger son, Anton, a sweetheart, but tough as Kevlar, said he wanted to be a football player. Robot football may sound crazy, but come to think of it, a Monday night battle between the Dallas Cowdroids and Seattle Seabots may be the only solution to the sport’s endless concussion problems.

He also said he wanted to be a soldier. If he means foot soldier, however, he might want to hold off on enlistment. Russia recently unveiled Fedor, a humanoid robot soldier that looks like RoboCop after a Whole30 crash diet; this space combat-ready android can fire handguns, drive vehicles, administer first aid and, one hopes, salute. Indeed, the world’s armies are in such an arms race developing grunt-bots that one British intelligence expert predicted that US forces will have more robot soldiers than humans by 2025.

And again, all of this stuff is happening now, not 25 years from now. Who knows what the jobs marketplace might look like by then. We might not even be the smartest beings on the planet.

Ever heard of the “singularity”? That is the term that futurists use to describe a potentially cataclysmic point at which machine intelligence catches up to human intelligence, and likely blows right past it. They may rule us. They may kill us. No wonder Musk says that AI “is potentially more dangerous than nukes”.

But is it really that dire? Fears of technology are as old as the Luddites, those machine-smashing British textile workers of the early 19th century. Usually, the fears turn out to be overblown. 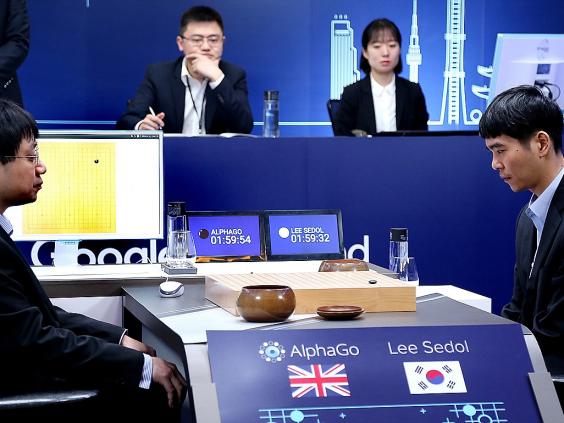 Google’s AlphaGo software beat a human world champion at Go, the most complicated board game in the world (Getty)

The rise of the automobile, to cite the obvious example, did indeed put most manure shovelers out of work. But it created millions of jobs to replace them, not just for Detroit assembly line workers, but for suburban homebuilders, Big Mac flippers and actors performing “Greased Lightning” in touring revivals of Grease. That is the process of creative destruction in a nutshell.

Since Ford’s book sent me down this rabbit hole in the first place, I reached out to him to see if he was concerned about all this for his own children: Tristan, 22, Colin, 17, and Elaine, 10.

He said the most vulnerable jobs in the robot economy are those involving predictable, repetitive tasks, however much training they require. “A lot of knowledge-based jobs are really routine – sitting in front of a computer and cranking out the same application over and over, whether it is a report or some kind of quantitative analysis,” he said.

Professions that rely on creative thinking enjoy some protection (Ford’s older son is a graduate student studying biomedical engineering). So do jobs emphasising empathy and interpersonal communication (his younger son wants to be a psychologist).

Even so, the ability to think creatively may not provide ultimate salvation. Ford said he was alarmed in May when Google’s AlphaGo software defeated a 19-year-old Chinese master at Go, considered to be the world’s most complicated board game.

“If you talk to the best Go players, even they can’t explain what they’re doing,” Ford said. “They’ll describe it as a ‘feeling’. It’s moving into the realm of intuition. And yet a computer was able to prove that it can beat anyone in the world.”

Looking for a silver lining, I spent an afternoon watching TED Talks with catchy titles like “Are Droids Taking Our Jobs?”

In one, Albert Wenger, an influential tech investor, promoted the basic income guarantee concept. Also known as universal basic income, this sunny concept holds that a robot-driven economy may someday produce an unlimited bounty of cool stuff while simultaneously releasing us from the drudgery of old-fashioned labour, leaving our government-funded children to enjoy bountiful lives of leisure as interpretive dancers or practitioners of bee-sting therapy, as touted by Gwyneth Paltrow. 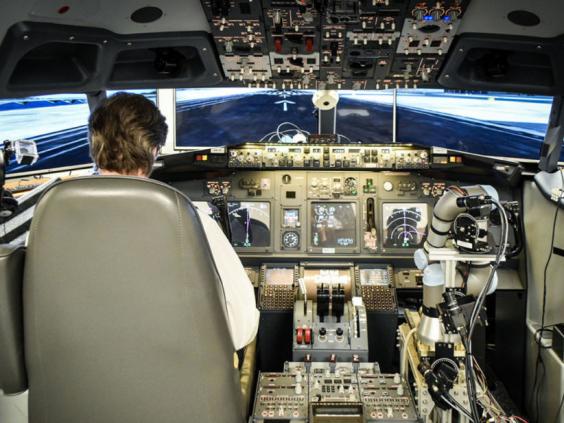 The idea is all the rage among Silicon Valley elites, who not only understand technology’s power, but also love to believe that it will be used for good. In their vision of a post-AI world without traditional jobs, everyone will receive a minimum weekly or monthly stipend (welfare for all, basically).

Another talk by David Autor, an economist, argued that reports of the death of work are greatly exaggerated. Almost 50 years after the introduction of the ATM, for instance, more humans actually work as bank tellers than ever. The computers simply freed the humans from mind-numbing work like counting out $20 bills to focus on more cognitively demanding tasks like “forging relationships with customers, solving problems and introducing them to new products like credit cards, loans and investments”, he said.

Computers, after all, are really good at some things and, for the moment, terrible at others. Even Anton intuits this. The other day I asked him if he thought robots were smarter or dumber than humans. “Sdumber,” he said after a long pause. Confused, I pushed him. “Smarter and dumber,” he explained with a cheeky smile.

He was joking. But he also happened to be right, according to Andrew McAfee, a management theorist at the Massachusetts Institute of Technology, whom I interviewed a short while later.

Discussing another of Anton’s career aspirations – songwriter – McAfee said that computers were already smart enough to come up with a better melody than a lot of humans. “The things our ears find pleasant, we know the rules for that stuff,” he said. “However, I’m going to be really surprised when there is a digital lyricist out there, somebody who can put words to that music that will actually resonate with people and make them think something about the human condition.”

Not everyone, of course, is cut out to be a cyborg-Springsteen. I asked McAfee what other jobs may exist a decade from now.

“I think health coaches are going to be a big industry of the future,” he said. “Restaurants that have a very good hospitality staff are not about to go away, even though we have more options to order via tablet.

“People who are interested in working with their hands, they’re going to be fine,” he said. “The robot plumber is a long, long way away.”